Students from Pakuranga College describe the 3D virtual reality game, Totally realistic sledding , they created as a collaborative project, and the skills they developed through the process.

What is virtual reality (VR)?

Virtual reality (VR) can be a powerful tool in supporting and facilitating STEM (Science, Technology, Engineering and Mathematics) education.

"Virtual reality entails presenting our senses with a computer generated virtual environment that we can explore."

Virtual reality describes a three-dimensional, computer generated environment which can be explored and interacted with by a person. That person becomes part of this virtual world or is immersed within this environment. While there, they can manipulate objects or perform a series of actions. A virtual environment should provide the appropriate responses – in real time as the person explores their surroundings.

VR is the use of computer technology to create a simulated environment.

For the complete VR experience, three things are needed:

What’s the difference between virtual reality and augmented reality?

A user wears a headset that tracks their movements and displays video and audio according to their position. Video is split into two images, one for each eye, while also applying barrel distortion to each image to counter pincushion distortion from the lenses. The result is a stereoscopic (“3D”) image with a wide field of view. Combined with stereoscopic 360 degree audio, a user can view and interact with an environment. 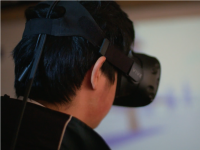 Before adopting a new technology like VR into the classroom, consider:

Pakuranga College is a future focused school. They are growing a digital technologies programme that encourages lifelong learning and prepares students for future career opportunities. They recognise the new digital technology strands are going to have a significant impact on how they deliver the curriculum, particularly in the junior school. By building on their senior school NCEA programme to provide an introduction to 2D and 3D programming at years 9 and 10 they are developing a seamless learning pathway. Currently, VR is an extension opportunity and a way for students to develop coding skills. Their aim is to build capacity within the school to bring VR into the curriculum and the timetabled classes.

VR provides an authentic context for students to engage with digital content, and learn about computational thinking and programming.

VR promotes content-rich learning and social interaction inside the classroom. There are two main ways of using VR in your teaching programme:

Students can participate in VR field trips watching 3D videos and using 3D apps, or play VR games. Using VR provides an immersive experience where students can engage with content. The visual element of VR enhances the relationships between concepts and information. Sometimes it is easier to see and hear something than have it explained to you. Tools like Google Cardboard are both a platform and a product to experience and encourage interest in VR.

VR technology offers scope for game development, design, and coding. Students need a basic computer literacy and the willingness to learn about a new interface.

At it's simplest, VR can be engaged with using a 360 degree camera to create images and videos for VR. At a more complex level, students can create, and interact with:

Students at Pakuranga College talk about the 3D virtual reality game they have developed and the skills they learned when creating the game. Students worked as a team with specific roles including: planning the game, designing and creating 3D assets, programming, and marketing. "There are skills you can’t learn inside the classroom that we learn when we make a game....you’re not just trying to make the best programme, you’re trying to make a game. You want to finish the game and make it run well. We’ve had to work under a lot of time pressure.....You learn to solve problems."

Connecting with other game developers beyond the classroom was a factor in the success of the students' game, Totally realistic sledding VR .

To make connections beyond the classroom, the students used:

Computational thinking can be loosely defined as, "the habits of mind developed from designing programs, software packages, and computations performed by machines" (Denning, 2017 ).

An algorithm is a series of steps that control a computational model, without requiring human judgment. "Computational thinking includes designing the model, not just the steps to control it"
(Denning, 2017 ).

Pakuranga College ICT faculty leader, Charlie Smith, and teacher, Tyne Crow see VR as a technology that's going to grow in the near future. To build teacher capacity, they have begun by developing a culture within the school where people were comfortable using the VR technology. They purchased equipment and have initiated a game development group, where students can code and develop 3D games during lunchtimes and after school. They describe the technology they are using with students and the benefits for learning.

Equipment for using VR with students

The type of equipment you choose to use depends on how you want to use VR in your teaching.

The cheaper equipment, cardboard headset with a smartphone enables students to watch 3D videos, which are available from free VR apps like Orbulus, Trench Experience VR, and Cardboard. There are also several on YouTube made with 360 cameras. 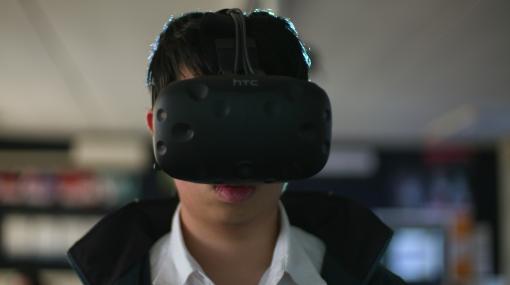 Teachers at Pakuranga College explain their process for introducing virtual reality (VR) and how they are encouraging students to be comfortable with new technologies. 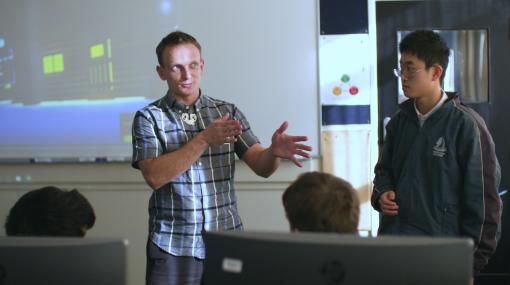 Students from Pakuranga College describe the VR game they created as a collaborative project, and the skills they developed through the process. 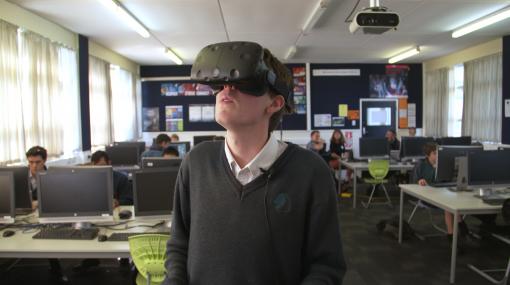 Teachers at Pakuranga College talk about how they have introduced VR into their school and the equipment they use.

What is virtual reality? [Definition and examples]

A blog post by Dr. Brian Jackson from AR Blog.

Formed in 2001 to champion, support and grow video game development in New Zealand. It is a not-for-profit incorporated society. Students are welcome to join.

Based in the UK, provides information on apps and equipment.

CoSpaces Edu provides students with all the tools they need to create, code, and explore their own virtual worlds, even in VR. The simple and easy to use platform can be operated across all devices – desktop browser or Chromebook, or the companion app for tablets and smartphones.

A list of VR resources for schools developed by the Digital Fluencies team at the University of Waikato.

How one teacher got started with virtual reality in the classroom

A blog post (Feb 2017) describing how a US middle school social studies teacher used VR as an immersive experience, by Elizabeth Mulvihill on the We Are Teachers website.

VR in education: What's already happening in the classroom

An informative blog post summarising how teachers are using VR in the classroom in 2016. It contains some useful ideas for getting started with immersive VR in your classroom.

Digital Technologies in the curriculum

Learning with DT in Secondary School

The 7 Principles of learning

Supporting Students who are deaf